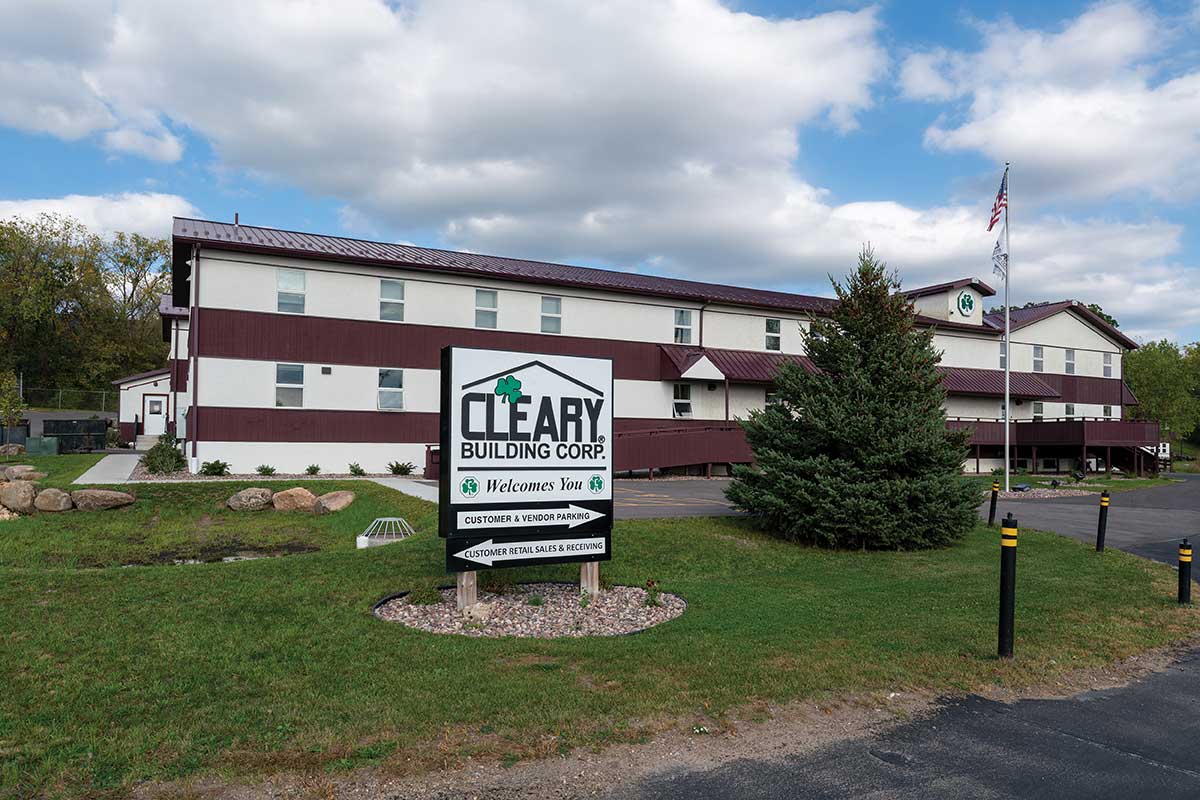 Cleary challenged the National Construction team to develop design options that went beyond basic office environment finishes like acoustic ceiling tiles and white walls. National Construction proposed several options that opened up the space and exposed interior rafters and ductwork, which had the added benefit of showcasing the Cleary-built building system. National also recommended building products that would wear well over time. For example, instead of using drywall for the ceiling between the rafters, National Construction suggested using metal. The new space is airy and modern, in line with the aesthetic preferences of a new generation of employees.

The biggest challenge was accommodating Cleary office employees who were working on site during the project, made even more complicated by the ongoing COVID-19 pandemic. Staff were moved in phases and allowed pass-through access during construction. Work was completed as quickly as possible to minimize disruption.

At a ribbon cutting celebrating the finished project and partnership, National Construction Co-owner Jeff Grundahl noted how meaningful it was to complete multiple projects for a client within its own industry. “The collaboration and self-performance by both of our teams was outstanding,” he said.

At the time of construction, Cleary had been in business for more than 40 years and sold more than 100,000 buildings. President Sean Cleary said the expansion represented the company’s commitment to its continued future growth and to the Verona community.

"National Construction went into this relationship with an open mind, knowing that we were working with another successful builder. We understood that they reached out to us for a reason. Once the trust was formed with new people at the table, we were a very successful team in our approach and delivery. We worked hand in hand with Cleary on a daily basis to achieve what they wanted. During the construction process it was all business, but when we were done we had made lasting relationships with all those involved."

"I am pleased to wholeheartedly recommend National Construction as a commercial general contractor. This was the second time National has worked with Cleary on a project. This most recent project was primarily successful due to the highly collaborative effort between Cleary and National – each company was responsible for discrete sections of the project, but by working together on a daily basis, the two companies became one team. National worked hard to establish relationships and trust between the key decision-makers, and the end result is a modern, spacious office that will support growth and serve Cleary’s needs well into the future. The longstanding relationship between Cleary and National was a solid foundation for the collaboration required on this project, and National was an outstanding partner. I would welcome the opportunity to work with National Construction again in the future."