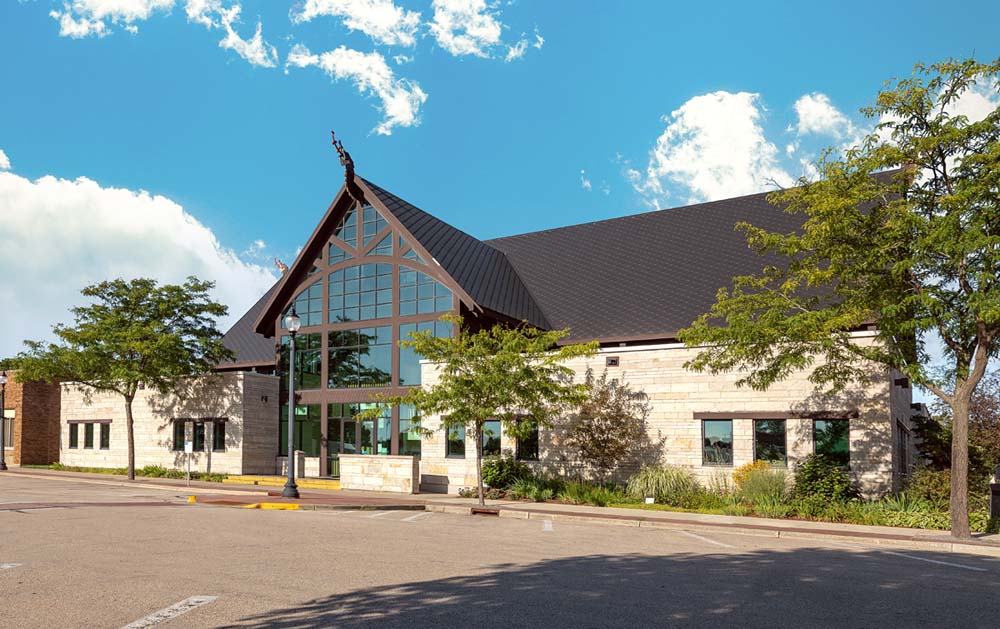 A library with history

The library originally opened in the DeForest Village Hall as a joint facility with the Town of Windsor, and it has gone through several changes as both communities have grown. In 1975, the library moved to a former Madison Power and Light building. Just five years later it moved again, into a converted liquor store in Constitution Plaza. In 1992 the library moved to a vacant space at the opposite end of the Plaza, and at the turn of the millennium, the community began planning for a fifth location.

Designed to reflect the rich Norwegian background of the DeForest community, the building is a contemporary interpretation of stave churches built throughout Norway around the 14th century. The natural stone base, heavy timber structure, and steep pitched roof are particularly reminiscent of these ancient buildings.

Four dragons are mounted on the roof of the library, each made up of 14 different pieces and weighing 100 pounds.

A site in the heart of downtown DeForest was selected. After initial design and budget work was completed, it was determined that 2,000 square foot needed to be added to meet code. National Construction value-engineered the plan to accomplish this goal, without increasing the budget, compromising the design or extending the construction timeline.

The central location and functional design of the new library provides community members with more space and services, including meeting and study rooms, computers, self-checkout stations, and notary, database and tax resources.

"Throughout the process, the firm was sensitive to our needs and concerns, and was rapid and thorough in response to any request for change."