Balancing the Construction Needs of Commercial Landlords and Tenants Do You Need an Owner’s Representative for Your Construction Project? How Current Pressures Are Affecting Construction Back to News

Written by Michael Popke, as seen in In Business Magazine’s September 2019 issue.

Historically, the design-bid-build approach has been how private and (especially) public projects get done. But thanks to a changing industry mindset, Jeff Grundahl is telling many of his clients these days to re-think the “bid” part.

“Why not go with a pick-and-choose method, and put all the right players on your team before you start?” asks the owner of National Construction, a Madison-based general contracting firm. “The ability for owners of private companies to do interviews ahead of time with all involved parties —the architect, contractor, engineer, and other partners — allows everybody to be on the same page from the get-go.”

In most cases, a competitive bid process remains in place, Grundahl says. The difference is that the project’s architect and general contractor often will recommend a handful of preferred subcontractors to bid on the project. That helps ensure that all bidders — regardless of which one is awarded the project — have previous experience with that general contractor and/or architecture firm, and provide detailed instead of lump sum bids for review. This approach considerably increases the likelihood that trusted partners will be working collaboratively on a given project. 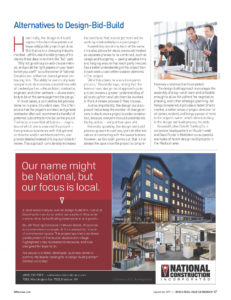 Assembling one strong team at the same time also allows for steps previously treated as separate phases to be combined, such as design and budgeting — saving valuable time and helping ensure that each party involved has a better understanding of the project than if each were siloed within isolated elements of the project.

“All of this allows for a very transparent process,” Grundahl says, noting that the team-driven, design-build approach gives project owners a greater understanding of all costs upfront and lets them be involved in the bid-review process (if they choose).

Just as importantly, the design-build approach helps keep the number of change orders in check once a project is under construction, because everyone involved understands the big picture — not just their piece of it.

Generally speaking, the design-bid-build process appears to cost less, given its inherent nature of contracting with the lowest bidders. However, as Grundahl points out, that is not always the case once the project is comprehensively understood and completed.

The design-build approach encourages the assembly of a top-notch team and is flexible enough to allow for upfront fee negotiation, phasing, and other strategic planning. All things considered, it provides a faster time to market, a better sense of project direction for all parties involved, and brings a peace of mind to the project’s owner, which often is lacking in the design-bid-build process, he adds.

Balancing the Construction Needs of Commercial Landlords and Tenants Do You Need an Owner’s Representative for Your Construction Project? How Current Pressures Are Affecting Construction Back to News